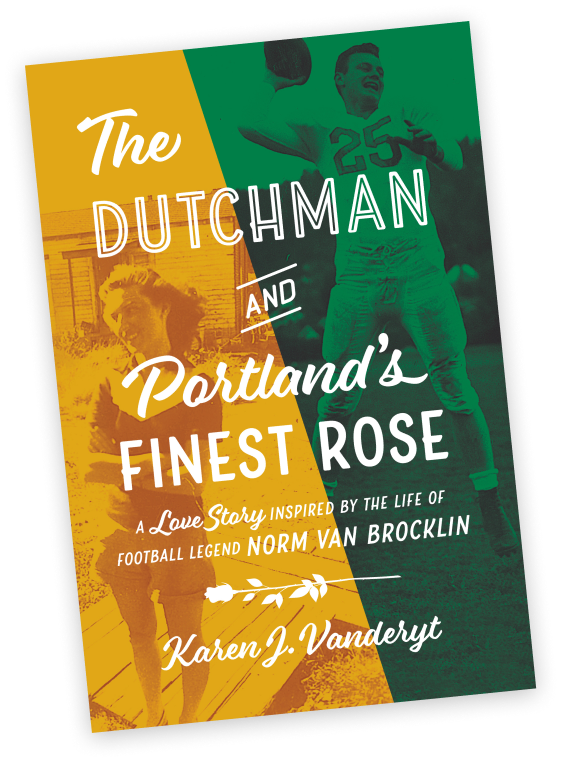 “Written with considerable skill and much love... will be enjoyed by anyone interested in football."

“The unlikely love story of Norm and Gloria shows compassion lives in all of us."

Available now in paperback and eBook!

Available now in paperback and eBook!

After WWII ends, two young people from different backgrounds, poised to begin disparate careers, collide under a Big Leaf Maple on the University of Oregon campus.

Spanning 1946-1949, Norm enthusiastically pursues the woman he loves while his star rises as the Oregon Ducks’ quarterback. Gloria hesitantly falls in love as she struggles with whether to pursue a career path in medicine or acquiesce to the pre-war traditional role of wife and mother.

Norm and Gloria’s eldest daughter writes her parent’s love story based on memories, research, and letters Norm sent to Gloria, sharing a nostalgic look at tradition and the daily trials to forge strength and live with integrity in family, academics, career, and a new world.

Author Karen J. Vanderyt was born in Eugene, Oregon where her father was completing his Master’s degree before his second season as quarterback for the LA Rams. The Dutchman and Portland’s Finest Rose is her third book. She lives a bi-coastal life between Atlanta, Georgia and Bend, Oregon.