I learned the other day the PAC-12 cancelled the 2020 football season.  No games for the Ducks this Fall.  This led me to reflect on the connections between now and my parent’s college days, though seventy years separate the two.

My parent’s story began in the spring of 1946, just as Vets were returning to the U of O campus, women were reevaluating their roles in education and society, and spring football practice was ramping up. Oregon, like many other universities, had canceled football from ‘43- ‘45 during WWII. According to fishduck.com, the ‘42 season had only 44 players on the roster, many, including head coach Tex Oliver, either enlisted or were drafted soon thereafter.  Obviously world-wide peace took top priority.

Norm, far right, with Navy buddies somewhere in the Pacific

My father, Norm Van Brocklin, was only seventeen years old and not of legal consent when he forged his mother’s signature on his enlistment papers, desperately wanting to join his three older brothers in the Navy. Initially, my grandma Van refused to give her permission, but when he was found out, later she relented to his persuasive argument that it was his patriotic duty to serve his country. I remain in awe of her strength and courage, all four sons served, all four returned home safely.

Norm was honorably discharged on January 1, 1946, and followed two high school teammates from Acalanes High to the U of O, attempting to make the football team as a walk-on, sixth string halfback. Armed with the passion to play ball and, thanks to the GI Bill, the promise of a college education, he planned on becoming the first Van Brocklin to earn a college diploma. He joined a ragtag group of experienced Vets and recent high school graduates, a true melting pot of men with various life experiences, each intent on making the team and making something of themselves. 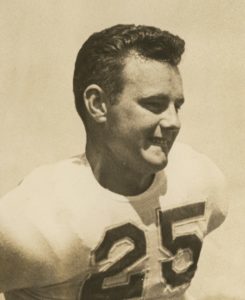 As chance or fate would have it, he literally bumped into Gloria Schiewe, who coincidentally turned out to be his biology lab instructor! On this, his second day on campus, April 2, 1946, he was beginning his college experience; she was preparing for graduation and contemplating medical school. Her dream had not factored in love and marriage as she was focused on teaching and working in pathology labs. Ultimately, Norm’s persistence convinced her otherwise, and they were married the following Spring of ‘47.

I compare this nostalgic past with what I see today on college campuses and am deeply saddened.  Now, it appears we have a new enemy, one that is invisible yet no less deadly and necessitates closing classrooms to students and denying competition for athletes. This gives new meaning to the definition of a student athlete, both aspects of college life are being compromised.

I’m struck by how torn our society is with the prospect of no college football this year, as if getting a college education isn’t as important. And though I can only speculate as to what my parents would think, I believe given the Covid-19 pandemic America is experiencing, these factors would put playing or not playing a game in perspective, just as universities made that tough decision back in the ‘40’s.

I have been in the stands watching football ever since I was old enough to sit in the bleachers at a year old. The prospect of no football depresses me just as it does many diehard fans. However, until we can be assured of the safety of the players, coaches, and fans, it’s simply too risky. To me, the tradeoff of health vs. sport is a no-brainer.

Evidently there is discussion about delaying the season till the Spring.  So maybe a good way to look at it is to celebrate the Ducks’ safe Fall practice and prepare ourselves for our first season of Spring football!

Let us listen to the lessons of the past.  Football will survive, we will survive, and we will heal, individually as well as a nation.